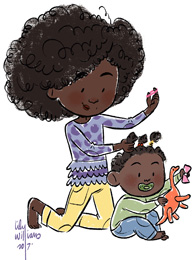 Lily's work was chosen for a special editions of Rainbow Rowell's Fangirl and Angie Thomas' The Hate U Give and has also appeared on the following websites: Greenpeace, Upworthy, IFLScience, One Green Planet, The Lily and more. When Lily isn't drawing, she can be found researching sharks, perfecting her waffle recipe, and playing with her rescue rabbits.